The curve of a hill and the line on the horizon made by a stand of trees furthers the beauty of a vista for landscapers and onlookers alike. But right from the start, it was rock that caught Gary Pisoni’s attention when he surveyed Soberanes Vineyard. Like the terroir that produced the “old-world” Burgundy wines he remembered drinking as a young man, this plot of land, too, was strewn with stones. It was here, on that section of ground where rock appears in greatest abundance, that winemaker Jeff thought would be the perfect place to plant Chardonnay.

Doing so was not an easy task. Mark, our vineyard manager, still recalls how difficult it was to pound stakes two feet deep into the unyielding, stone-filled ground. But the Pisoni family were rewarded a few years later, when reviews of the Lucia Soberanes Chardonnay began filtering into the press. Vinous Media’s Josh Raynolds identified the Lucia 2013 Soberanes Vineyard Chardonnay as replete with “… mineral and floral qualities” and described the next vintage as “finished with outstanding persistence” and “bracing mineral” notes. The Wine Advocate echoed Raynolds’ assessment of the Lucia 2014 Soberanes Chardonnay, highlighting its hints of “crushed rock.”

While outgrowths such as hills and trees produce structure and elegance for the eye, what winemakers term “minerality” helps create the same characteristics on the palate. Unsurprisingly, the relationship between soil structure and wine quality is exceedingly complex. It isn’t easy to determine exactly how must and soil minerals interact to produce the elusive mineral finish so prized in winemaking. But the fact remains that once fermented, the fruits of Soberanes Vineyard—its Chardonnay, but also its Pinot Noir and Syrah—consistently display this character.

Planting vines in very rocky soil stresses the plants in such a way as to encourage the expression of minerality. “Tasting the fruit yields lots of textural components,” Jeff explains. “In rockier soils, you can identify this textured character very early.” Climate contributes other factors in grape-growing, including acidity. The wine-growing regions of central California in general and the terroir of the Santa Lucia Highlands in specific promote a high level of natural acidity in wine. At Soberanes Vineyard, in particular, soil and weather tend to work in happy combination upon the fruit to further minerality.

Once the wine is in barrel, Jeff furthers these invigorating, cleansing mineral notes by practicing a very reductive winemaking style. So-called because it reduces rather than augments wine’s exposure to oxygen, reduction also encourages the retention of minerality. Some winemakers prefer a more aggressive oxidative style. By contrast, and in keeping with the work of the late Denis Dubourdieu, a University of Bordeaux oenologist who prompted a revolution in the quality of white wine in the 1990s, Jeff’s gentle winemaking style favors minimal intervention. He lessens the transfer of wine between barrels (a technique known as “racking”) to avoid aerating the wine. Very judicious stirring of the barrels helps achieve just the right amount of reduction, as does not over-mixing the heavy lees upon which Lucia Chardonnay is aged. These less aggressive techniques not only further the expression of minerality, but also result in wine that takes longer to mature and that ages well.

...these wines are sourced from some of the most carefully and skillfully watched vineyards anywhere.

Nowhere is this careful, deliberate style of winemaking more self-evident than in the press cycle that follows crush. As both Mark and Jeff are well aware, cultivating grapes with superb phenolic potential makes excellent wine possible. But pressing, Jeff comments, is “the most crucial step in determining the style and direction of Chardonnay’s life-cycle in the winery.” The process unfolds slowly over two and a half to three hours, during which the wine is tasted at some twenty-five different intervals. Each time Jeff assess a sample, he checks the sugar (which shifts just a few tenths of a percent over the course of successive pressing) and the pH, which changes far more radically. The acid concentration of any wine helps determine its structural and textural balance. Press too long, and too much harshness from the phenolic compounds in the skins and stems is released, with correspondingly negative implications for the wine’s acid profile. Press insufficiently, and the wine will not exhibit the structural complexity that lingers on the palate. To get the most out of the press cycle requires not just experience, but also a kind of intuition. Winemakers like Jeff Pisoni strive to become virtuosos of this skill.

In the end, it is impossible to determine exactly how soil influences grape quality, just as it is impossible to explain the complicated process in wine-making that sustains minerality. Nonetheless, critics continue to praise the Lucia Chardonnay, Pinot Noir, and Syrah of Soberanes Vineyard for exhibiting just this trait. Their comments cannot help but please the Pisoni family, who take care year after year to make sure that Lucia wines, regardless of their individual profiles, offer beautiful expression of the specific landscapes that are so important in their creation.

This lively wine opens up quickly with an elegant bouquet of spring flowers, peach skin, key lime, sea breeze, and stone fruit, as well as hints of crushed rock from its origin in our mineral-driven Soberanes Vineyard. Aging for 16 months in 60-gallon and larger barrels, the resulting wine is both pure and focused, with beautifully integrated acidity and oak. Lucia Soberanes Chardonnay is greenish-gold in hue and comprised of various Wente and other “suitcase” clones of chardonnay that yield small quantities but intense character. This wine has great volume and lots of length on the palate and will gain depth as it ages. It drinks well now, and also has the ability to age beyond a decade.

Fragrant, floral, and spicy: the aromas of this Soberanes Pinot Noir seem to leap from the glass. Dark red in color, the wine offers notes of rose petal and lavender as well as a seamless blend of graphite, cherry, blackberry and wild strawberry. All combine to give it a truly elegant nose. Minerality is evident in the crystalline purity and focus of the wine. Its rich palate is replete with soft, velvety tannins that conclude with a subtle, many-layered finish. Be sure to give this wine air; if cool, allow it to warm up a little so that the shift in temperature makes present the full range of its different aromas. We’re especially proud of the balance between the phenolic maturity of this wine’s tannins and its aromatic finesse.  This wine will age wonderfully for a decade, but also drinks well now.

The 2016 Lucia Soberanes Syrah is savory in profile and possesses a deep purple hue. Its aromas are full of baking spice, white pepper, and spring flowers—the whole mixed with blackberry and blueberry. With an underlying earthy core and gentle tannins, the palate unfolds beautifully. We’ve aged this cuvée in barrel sizes that range from 60-132 gallons to coax out added depth. This vintage we added a minimal amount of whole clusters to the fermentation to give the wine a purer and more approachable profile. The 2016 Lucia Soberanes Syrah will drink well now or age gracefully for over a decade in the cellar.

A blend of 62% Pisoni Vineyards and 38% Soberanes Vineyard, the 2016 Lucia Chardonnay possesses lively aromas of citrus oil, orange peel, and golden delicious apple coupled with beautiful green mango notes. This cuvée combines a variety of Wente Chardonnay clonal selections to bring concentration and texture. The high-altitude blocks of Pisoni Vineyards create a phenolic structure and the vines at the Soberanes Vineyard give a refreshing, bright acidity on the palate. This is a wonderful chardonnay to enjoy now that will also cellar well for several years.

This Lucia Pinot Noir, reflects its harmonious blend of three vineyards: (47% Pisoni, 29% Garys’, and 24% Soberanes) in its deep garnet color. It begins by enticing the palate with ripe plum and raspberry, spiced cherries and black tea, and subtle notes of cedar and forest floor. As this wine continues to open up, it shows a complex palate of firm tannins and intense character. Like our single-vineyard bottlings, we use only free-run wine to develop the character of this appellation-based vintage. The three vineyards from which it has been created reflect the Santa Lucia Highlands’ diverse features, from the concentration of its mountain fruit to the light, elegant aromas of its more fog-laden vineyards.

In the glass, this beautiful wine possesses vibrant aromas of fresh rose petal, wild strawberry, cranberry, ruby grapefruit, blood orange and nectarine. Its translucent pink color was attained by a very gentle pressing of the pinot noir berries. This cuvée was sourced from our estate vineyards in the Santa Lucia Highlands. Fermentation was carried out in barrel—but specifically “neutral” oak barrels in order to develop volume on the palate without oak flavor. The result is a bright, refreshing wine finished with crisp acidity that will suit almost any occasion. The rosé shows best if served chilled. 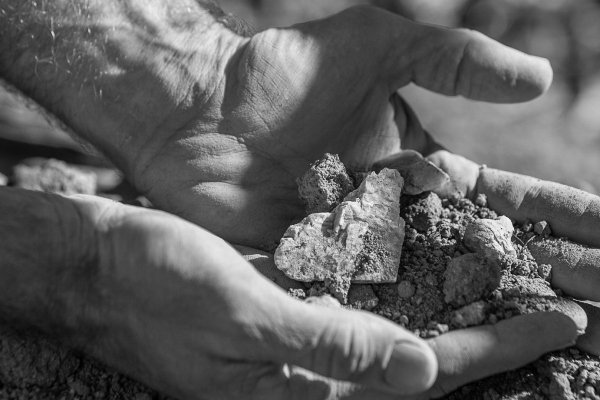 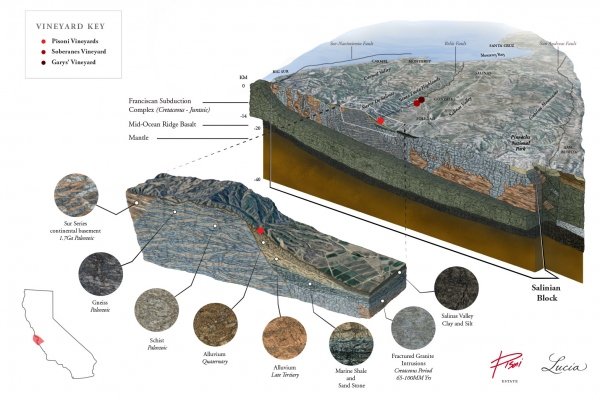 Pisoni Vineyards from Below:
A Short History of Monterey County’s Geology 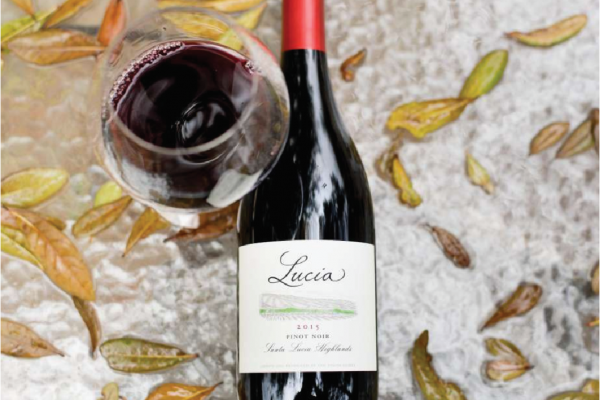