Vineyard managers like Mark Pisoni who are committed to sustainability can avail themselves of a raft of new technologies to work in accordance with Nature. Soil moisture sensors that continuously measure evapotranspiration, for instance, allow grapegrowers to irrigate with laser-like precision. But one of the most widespread technologies vintners use to coax distinguished bottles into being is as crucial as it is ancient. Oak barrels have been used not just to transport wine but to temper and refine its structure for close to two thousand years, since Julius Caesar conquered Gaul in 50 BC.

The Pisonis approach this time-honored practice with inimitable thoughtfulness and care. Mark treats each vineyard block (and indeed, each sub-block) as a unique grapegrowing environment. Jeff, winemaker, follows suit during the process the wine is fermenting and maturing by evaluating every barrel on its own merits. Whether the wine be Lucia Soberanes Vineyard Pinot Noir, whose grapes are transferred to oak after up to three weeks in a fermentation tank, or Lucia Chardonnay, which spends its entire life in barrel after being pressed, each sixty-gallon container is treated distinctly.

During the initial fermentation, Jeff and his team monitor all of the barrels daily. “We continuously ask what each barrel needs,” Jeff explains. “If it’s slow to ferment, we may warm it slightly or stir the lees.” At the same time that the lees, or sediment at the bottom of the barrel, is assessed, sugar and alcohol are measured and the wine observed under a microscope. While a view under the microscope gives a perspective of the yeast, it also provides an intimate relationship with the fermenting wine– like caring for an individual. Once fermentation is well established, Jeff makes sure that each barrel’s contents are sampled every two weeks. “As we taste, we’re making decisions about what blend each barrel will go into,” he explains.

Just like my brother and father look at vines as people, I treat barrels as unique individuals in the cellar.

Indeed, the factors that influence wine in barrel are myriad and highly complex. Yeasts act on sugars to produce alcohol and carbon dioxide, and tart malic acid is converted into silkier lactic acid during the process of malolactic conversion. These ongoing processes underscore how wine, “a living thing,” as Jeff clarifies, is constantly evolving. Additionally, contact with its container—the oak wood of the barrel—informs and acts upon the developing wine. Oak wood is composed of several different classes of complex compounds, each of which possesses its own textural and flavor notes. The quality of the wood (its relative density or porosity) as well as the time it’s left to dry (“seasoned”) and the way it’s “toasted” as a cooper curves it during firing all play their roles during the process—part art and part science—by the juice of grapes in barrel is transformed into distinguished wine.

Unsurprisingly, barrels are substantial investments for vintners. More important for the Pisonis, however, is the specific choice of barrel, a decision never undertaken lightly. “We work closely with the cooper and order specific types of toasting, grain and other parameters,” Jeff notes. “Yet even in toasting specified as identical, the character of the wood—specifically, its grain—and the craft of coopering it means that each barrel is essentially an individual.”

As the months go by and Jeff and his team continue to measure fermentation rates, they also order and classify the barrels to determine what blend each will makes its way into. Larger wineries track groups of barrels together. But Pisoni treats each barrel as a separate entity because each volume of wine inside it maintains its own character. The family underscores the artisanal nature of its wine by by assigning each barrel a different number. In this way, Jeff asserts, the family makes “better blending decisions, because we work barrel by barrel.” Alongside Mark, whose care distinguishing each vineyard block helps to coax the best grapes into being, Jeff’s attention to the character of each barrel enables him to craft wine of which the family can be justifiably proud.

Shimmering with a youthful brilliance in the glass, the 2017 Lucia Soberanes Vineyard Chardonnay offers lifted aromatics of lemon oil, orange blossom, and green apple on the finish. A product of the dense, rocky soils of this site, the wine is flinty and mineral-driven to its core. Its focused acidity bursts with energy as it dances on the palate. Each windswept grape cluster delivers immense concentration that is carefully extracted through gentle pressing. Minimal stirring of the lees over the course of a 15-month slumber in the cellar provides this chardonnay with a focused intensity. In the glass, this wine comes to life with a flawless balance of fruit, density and length, all of which combine to produce a delicate tension that will reward for many years to come.

Deep ruby as it fills the glass, the 2017 Lucia Soberanes Pinot Noir offers a stunning bouquet of fruit, spice and floral notes. Black cherry, currant, Santa Rosa plum, and rose petal interweave with delicate savory notes of sage, wet earth, and baking spice. Partial whole cluster fermentation and meticulous cap management have yielded soft, elegant tannin together with a persistent finish. Perpetual afternoon winds sweep away any lingering morning fog during the growing season, preserving the acidity that becomes the backbone upon which this wine is built. Long-term cellaring will satisfy any palate, but for those who simply cannot wait, early drinking will also prove rewarding.

Inky purple to its essence, the 2017 Lucia Soberanes Syrah explodes with savory notes of black peppercorn, cedar, anise, and bacon. A structure of soft, elegant tannin envelops notes of clove, smoked meat, and dark berries. Added depth and complexity are attained through generous whole cluster fermentation, together with long aging in the cellar in 60- and 132-gallon French oak barrels. The cool, windy rows of the Soberanes Vineyard produce fruit with great acidity and a sturdy backbone of structure. The softer tannins will drink well now or age beautifully for over a decade in the cellar.

A deliciously pure blend of 45% Pisoni and 55% Soberanes vineyards, the 2017 Lucia Chardonnay exhibits both power and elegance. Generous notes from Pisoni Vineyards combine with lemon curd, peach, baking spice, Golden Delicious apple. These aromas intertwine with layered richness and an expansive palate. Soberanes stakes its claim with hints of crushed rock and orange blossom, culminating harmoniously with a seamless, long, and textured finish.

A beautifully pure expression of this varietal, the 2017 Santa Lucia Highlands Pinot Noir sings with the greatest notes of each vineyard from which it was born (the Garys’, Soberanes, & Pisoni Vineyards). Shielded amongst a brilliant youthful ruby hue, waves of Bing cherry, violet, and sandalwood spice escape into the glass as this wine takes its first breath. On the palate, this wine stuns with the complexity and focus of one of its single vineyard siblings. The main act showcases bright notes of raspberry and strawberry cream paired with more elegant flavors of sage and baking spice, which open the curtain one last time for an encore of focused acidity and a layered, lingering finish.

Crisp and refreshing, the 2018 Lucy Rosé blossoms in the glass with notes of nectarine, white peach, rose petal, and a delicate hint of sea breeze. Possessing a pale coral color derived from gentle pressing and minimal skin contact, this barrel select cuvée is bred from our estate vineyards in the Santa Lucia Highlands. Flavors of crushed strawberry, watermelon, and citrus mingle with a textured and complex palate. Neutral oak barrel fermentation yields beautiful volume, complimented by mouthwatering acidity on the finish. Best served chilled, this rosé pairs perfectly with almost any dish and every occasion. 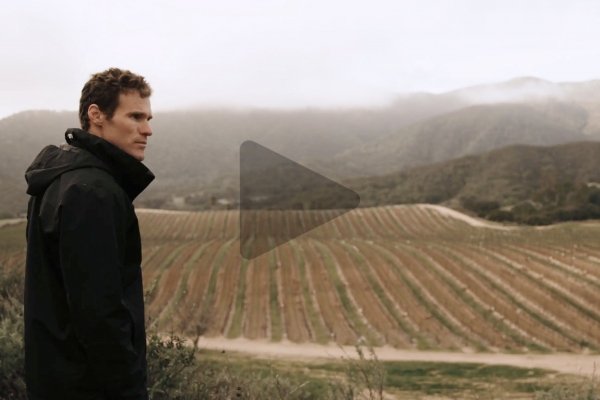 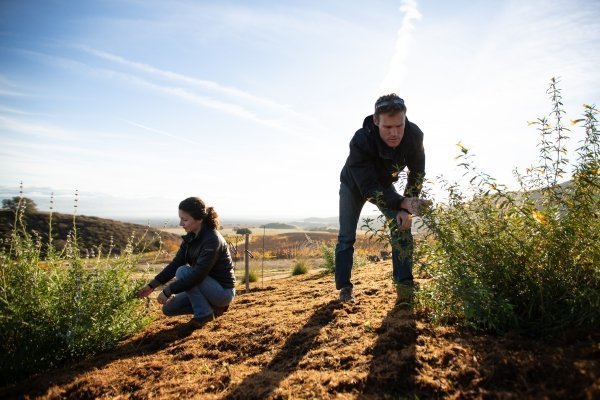 Farming for the Future.
Sustainability at Pisoni Vineyards