Paradoxically, drought years can produce unusually good wine—providing the vines are husbanded properly. With limited rainfall, the roots dig deep for moisture, and the resulting fruit possesses the kind of tannins that can produce artful complexity in wine. Pisoni’s 2016 estate wines offer excellent example of the bold tannins and intensity that develop when vines are stressed in this way. But they must also be carefully coaxed and managed. Conditions in 2016 led the Pisonis to drop a considerable amount of fruit, Jeff notes. Indeed, at approximately two tons/acre, the yield for the 2016 vintage was considerably lower than Pisoni’s three ton/acre maximum.

Mark, Pisoni’s vineyard manager explains this phenomenon: “the 2016 drought made the vines work extra hard. Phenolic maturity came early, and we adapted our farming to obtain balanced fruit by harvest.” Once the fruit reached the winery, Jeff furthered Mark’s work in the vineyard with similar fine-tuned adjustments during fermentation. In the cellar, Jeff, explains, “our priority was to watch the tannin evolution during fermentation.” Because the fruit had greater structure, Jeff shifted the majority of punch-down (the practice of breaking up the “cap” of skins, seeds, stems, and pulp that rise to the surface during fermentation) to the beginning and middle of this process with less at the end. 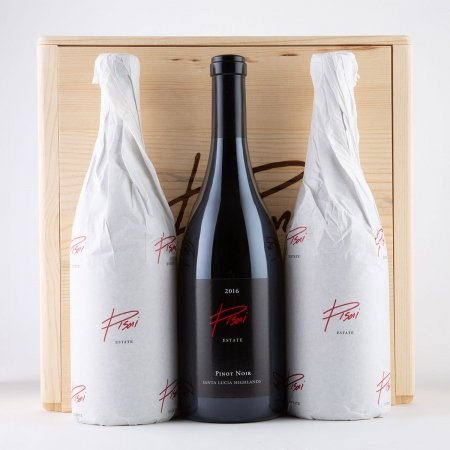 As many people know, grapevines are highly sensitive to changes in soil and weather. Just as the vines respond to weather, so the Pisonis respond to the vines. For Jeff and Mark and their father Gary, who work in concert to this end, adaption is an active, ongoing process—one performed season after season.

Their commitment to developing sustainable farming methods is a natural outgrowth of their close attention to the land. They plant a cover crop to foster soil diversity and a balanced ecosystem in the vineyards. They graft phylloxera-resistant and drought-resistant root stocks onto the vines as well as growing grapes on their own roots so that they can tailor their grape-growing to specific soil characteristics. And they till the soil in accord with the level of precipitation to prevent run-off and increase the amount of moisture the land absorbs after each rain. Their Santa Lucia Highland vineyards are at inherently low risk to rising temperatures, thanks both to their elevation and their location near the Pacific, with its cooling, almost year-round fogs. Nonetheless, the family sees sustainable winemaking as a process that is both ecologically sound and socially responsible. Jeff sums up this point of view nicely. In the course of working toward creating the best possible wine, “working toward sustainable farming allows us to do our part in Monterey County on our ranch.”

We are honored to share Jeb Dunnuck's reviews, which were recently published on his website, JebDunnuck.com. Formerly of Robert Parker's Wine Advocate, Mr. Dunnuck's new online publication offers comprehensive coverage through regional reports and reviews of the top wines of the world. Of the 2016 vintage, Dunnuck writes:

Another sensational wine from this Grand Cru terroir ...

It bears more than a passing resemblance to a great Côte Rôtie.

A wine that harnesses the true essence of our rocky, wind-swept vineyard in an excellent vintage, the 2016 Pisoni Estate Chardonnay entices the senses. Tightly wound at first, layer after layer emerge and showcase aromas of acacia flower, white peach, lemon peel, and Bosc pear. Extended aging of 14 months in 75% new French oak barrels gives added texture and complexity, all while displaying focused acidity and a generous mouthfeel. A truly seamless wine from start to finish, even at its young age, this wine will continue to spread its wings for years to come.

Just as a walk through a summer garden provides flashes of color, the 2016 Pisoni Estate Pinot Noir offers aromatic bursts of wild strawberry, freshly-cut violets, and rose petal. Its vibrancy in the glass is matched on the palate with intensely pure fruit within which Bing cherry notes marry with hints of baking spice and vanilla. Blankets of fog protected the slow-ripening fruit on the vines so that each grape cluster eased its way into assured phenolic development by harvest. The resulting wine’s firm tannin and focused acidity move toward a broad, thorough finish. This is a wine capable of harmonizing each of its attributes and that demonstrates its potential to develop beautifully in bottle for the coming decade and beyond.

The 2016 Susan’s Hill Syrah appears black as ink at its center with a deep purple rim in the glass. A concentration of color that signals this wine’s great aging potential. As more air is introduced with each swirl, the wine shows its hand: savory aromas of cured meats, tobacco, and spiced plum. A dense and layered core of black pepper, blueberry and wild blackberry envelop the palate. The high elevation of the site on which the fruit is produced together with the granite-laden soil result in great concentration of flavor and structural complexity in the form of fine-grained tannin and age-worthy acidity. Tightly wound in its infancy, this wine will benefit from a long decant, or from the time it takes the bottle to collect a mantle of dust while resting peacefully in your cellar. 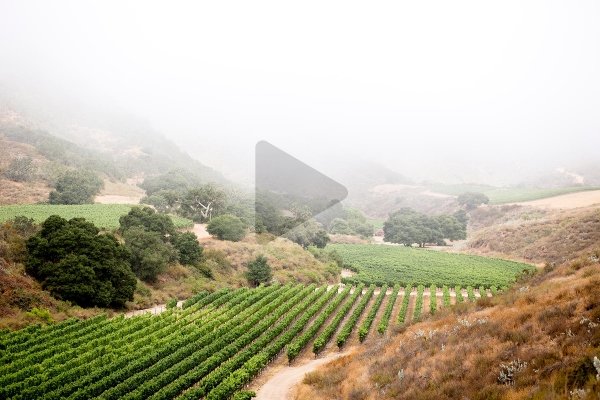 Jeb Dunnuck on the 2016 Vintage